Weed and Shrooms: What they are, how they work?

Weed and Shrooms were an important part of popular culture and an integral component of the psychedelic scene. They prominently feature as a part of art, culture, and history. When countries around the world started … 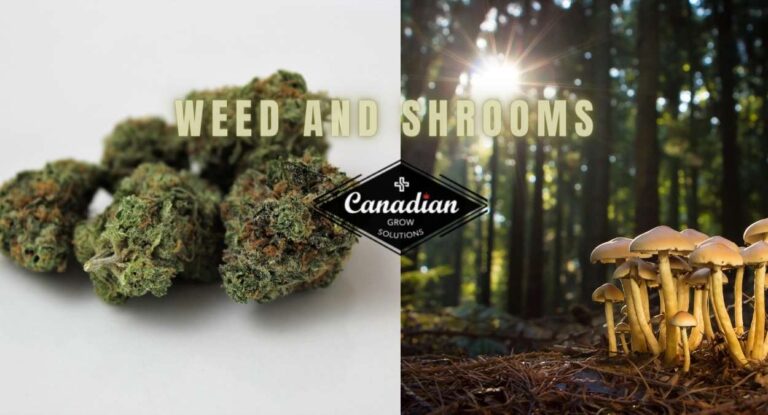 Weed and Shrooms were an important part of popular culture and an integral component of the psychedelic scene. They prominently feature as a part of art, culture, and history. When countries around the world started banning marijuana and other recreational drugs, this counter-culture took a back seat.

Now though, countries have started partly started legalizing weed and other recreational drugs, which means that the use of marijuana and mushrooms is finding its way back into popular culture.

So, what are weed and shroom, exactly? What are the effects of using them? How do they create a recreational high? Can they be used together? This article focuses on the key aspects of these two prevalent recreational drugs.

What is a weed?

Weed or marijuana is obtained from the extract of the cannabis plant, which is also known as Cannabis sativa. The extract of this plant contains many different compounds that render recreational and medicinal properties.

How is weed consumed?

There are several different ways of consuming weed. Some of the most common methods include:

How does weed work?

Each method has its own way of working. How high you get, and your experience depends on factors such as:

Effects of weed on the body:

The most common effects of consuming marijuana include mind and body relaxation, recreational high, reduced anxiety and depression, improved hunger, muscle relaxation, etc. For this reason, this drug is routinely used as a cure for anxiety disorders, chronic pain, depression, food disorders, and chronic conditions.

Despite these benefits, when consumed in larger and potent doses, weed can cause side effects such as hallucinations, increased heartbeat, nausea, vomiting, paranoia, and altered perception of time and space. The key is always to start low and slow and be responsible for how much you are consuming.

How long do the effects last?

Smoking and vaping give you an instant high, sometimes within the first few minutes of your first drag. This is because marijuana directly enters your lungs, from where it instantly enters your bloodstream. The high and effects can continue for a couple of hours after your last use.

Edibles usually take a couple of hours to kick in since they have to get digested and enter your bloodstream before the effects start showing up.

The THC in weed works with the receptors in your brain and body and brings about changes in memory, coordination, thinking, perception, etc. For this reason, weed is one of the most popular recreational drugs.

Magic mushrooms, or shrooms as they are popularly known, are wild mushrooms that contain a compound known as psilocybin. This compound, just like THC in weed, is responsible for causing psychoactive and hallucinogenic effects in the user.

How are shrooms consumed?

The most common ways of consuming magic mushrooms include:

Some users experiment with smoking shrooms, but it isn’t widely popular because smoking doesn’t produce any visible beneficial effects.

How do Shrooms work?

Psilocybin is one of the most well-known and popular psychedelics and is famous the world over. Just like a weed, magic mushrooms have been a popular drug for centuries. The psychedelic compound, though, was first isolated by Dr. Hoffman in 1958.

Over 100 different varieties of wild mushrooms have this component. Psilocybin works by activating the serotonin receptors in the part of your brain that controls perception, mood, and cognition. Serotonin is often referred to as a happy hormone. At lower doses, shrooms make for an enjoyable, pleasant and mind-altering experience. Higher doses lead to uncomfortable experiences, taking a few hours to nearly a day to wear off.

Effects of Shrooms on the body:

Consuming mushrooms enhances your mood, creates a sense of euphoria, extreme sense of well-being, and extreme happiness. In short, every experience is extreme.

A 2012 article studying the effects of psilocybin on the brain found that psilocybin decreases the activity in the brain responsible for physical and psychological perception and interaction with the world.

On the flip side, though, psychedelics also work on the areas of the brain that regulate panic responses. This is precisely the reason why many people who consume shrooms experience fear, paranoia, and other unfavourable experiences.

How long do the effects last?

Typically the effects of a shroom trip depend on the following factors:

The effects of a shroom trip can last anywhere between 6 to 8 hours, though some users report experiencing the effects a lot longer. Most people get back to their normal state within a day, while others can experience lingering effects into the next day too. With bad trips, though, the effects can be more brutal to shake off. You will continue to experience effects such as a hangover through the next day too. For this reason, you must always be careful and responsible when taking shrooms. An excellent tip to enjoy the full effects of this psychedelic drug is to start with the right frame of mind. Taking mushrooms when you are sad, angry, or upset can cause unwanted effects such as paranoia and depression.

When you are happy and calm, shrooms press the right buttons in your brain, and you can enjoy a sense of euphoria and detachment. Always be slow and steady and never bring alcohol into the mix.

Shrooms and Weed may differ in how they work on the body, but ultimately, both provide relaxation, euphoria, and certain medical benefits for the users. No wonder then that both these drugs have been popular through the centuries.

Responsible use is the key to enjoying the full benefits and avoiding unpleasant effects for shrooms and weed.

How to order same-day weed delivery in Toronto?

Things to Know Before Getting a Cannabis Extraction System