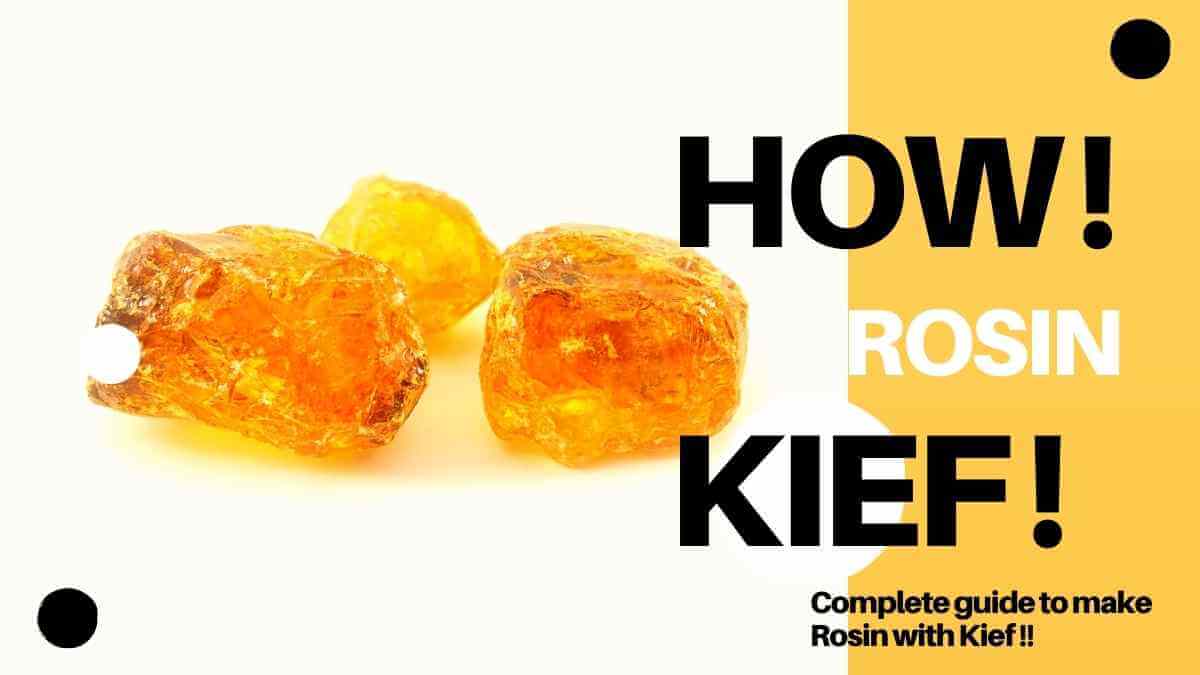 For cannabis enthusiasts who are unaware of other forms, rosin may seem like honey from outer space. But the reality is- rosin is one of the easiest derivative products of weed. It’s so easy that you can make rosin with kief or hash at your home. And all that you need is some weed, a hair straightener or a press, and some buttering paper.

Don’t worry, we are here to help you make Rosin with Kief. This article will share the step by step process to make it. But before that, wouldn’t it be better to know what Rosin is exactly?

If you’re familiar with CBD oils, shatter, and wax then this won’t be a tough nut to crack. Rosin is nothing other than the extracts of compounds in cannabis. It has everything from aromatic terpenes to THC and many things more. In fact, studies show that Rosin is 60%-70% THC.

A treat for tokers and euphoric cannabis lovers.

So, now that you are through with what Rosin is, it’s appropriate that we tell you how you can make it at home.

How to make rosin from kief?

Presuming that you already know what kief is, we won’t waste your or our time explaining it to you. But, you must note that you can alternatively use hash also to make rosin. The whole process would still be the same.

Your first step should be to pack the kief inside a small non-woven bag. The bag should be permeable to let the oils leak out, but not the kief particles. The primary reason for using a bag is to keep your kief from contamination. But, if you think you can handle it without using a bag, it’s your choice.

The next thing you should be doing is placing the bag inside the butter paper. The paper is for collecting the resins and oils that makes up rosin.

Step 3. Set the temperature on your straightener or press

Before you start making the rosin, you need to ensure that your heating press or the straightener is maintained at the right temperature. You wouldn’t want to burn the contents. But at the same time, you also wouldn’t want the heat to be insufficient for making rosin. It’s a careful balance between the two. Typically, the temperature around the 110-degree Celsius is considered best. But since you’re using a non-conventional heater, you’ll have to work with your assumptions.

The last step is to heat the kief while pressing it firmly. The heat will extract the oils and resins, while the pressure will push it out.

The golden-brown honey-like resin that you receive on the butter paper, in the end, is rosin.

So, now that you know how to make rosin from kief, you must also learn how you can consume it.

There are primarily three ways you can consume it- smoke it up, vape it, or hit the bong!

Well, we assume that you are pretty familiar with these three methods already. But, the real struggle would be figuring out how you will smoke or hit the bong when all you have is a honey-like substance? Don’t worry, we’re here to help you!

Rolling a Blunt with Rosin

Usually, smokers tend to either soak the rolling paper in the rosin or the herbs. You can use dry tobacco, lavender strains, or any other herb that you like. But, make sure that you do not wet the gummy strip on the paper. Wetting it with rosin will make it difficult to roll the paper when you fill it up.

Hitting a Bong with Rosin

When hitting a bong, you’ll need a dab tool. It is a small needle-like tool that is used to smoke or bong wax. Scoop up a small portion of rosin and place it in the chillum. Use a small torch to heat up the rosin and inhale from the mouthpiece. You’ll feel all the flavours and aromas but with a cool breeze in your mouth.

Rosin is by far the most identical kin of natural weed but without smoke. So, if you haven’t tried it yet, we suggest you do it ASAP. And please let us know if we served you the info you needed?